Dinesh Charan Shrestha is a leader of both the traditional and contemporary Newar art of Nepal. His sacred artworks depicting deities are solidly based on traditional Nepalese iconography but include influences from other sources, including naturalistic anatomy, photographic lighting, and Italian Renaissance art. He is renowned for his incredible attention to detail in both his traditional gouache and watercolor paintings, as well as his more innovative oil paintings.

Like many Nepalese, he reveres Hindu and Buddhist deities equally. He grew up hearing devotional songs and spiritual teaching tales, which included colorful descriptions of the appearance and characteristics of deities and enlightened beings. For him, making art is a spiritual practice (sadhana). He grew up in Kathmandu and currently resides in Berkeley, California with his family.

“When I was a child I would draw comic book characters for fun. One day when I visited a museum in Nepal I saw a traditional Nepalese Thangka painting. I was impressed by how the detailed work of the artist brought the diety to life. This encounter with the painting inspired me to study and to learn Nepalese Thangka (Pawvha) painting. When my older brother started to do Thanka painting I felt like it was challenging but rewarding work and it inspired me to take up my own brush to begin painting.” 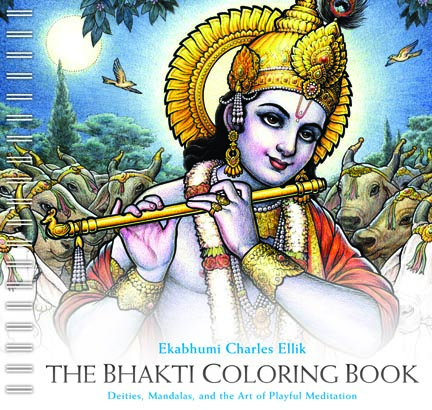 I’m so lucky to teach in such an exquisite room. The Peacock Room was lovingly painted by sacred artist Ekabhumi while infusing mantra into every stroke. Hope you can join me, or any of the other wonderful teachers who teach in this space. It will uplift your practice!
—Abby Tucker